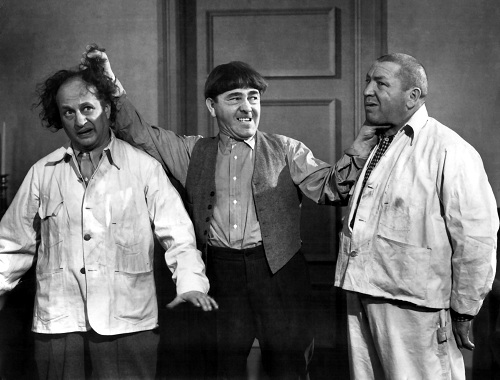 Getting the dig off to a start Sunday, October 21, 2012. My friends Dave and John and I had a blast. The finds certainly weren’t anything to send off to any bottle auction, but the dig itself is off to a very interesting start and the fun will continue. Obviously, as you will see, it was our first privy dig.

We chose the first known privy straight off my kitchen door, which ended up being located right in front of a shed built some 30 years ago, but it was not in our way and was actually a benefit, as all the “Shovels and rakes and implements of destruction” were very close at hand. Below are pics with text which should give a good idea of what occurred our first day.

We ended up realizing that the hole we dug was approximately 1/2 off center with the original outhouse privy hole. It was neither wood or stone/bricklined  and was a simple hole in the ground as one might expect on a very old late 18th Century farm. We were south of it by half and our finds shown below were on the north side of the hole. 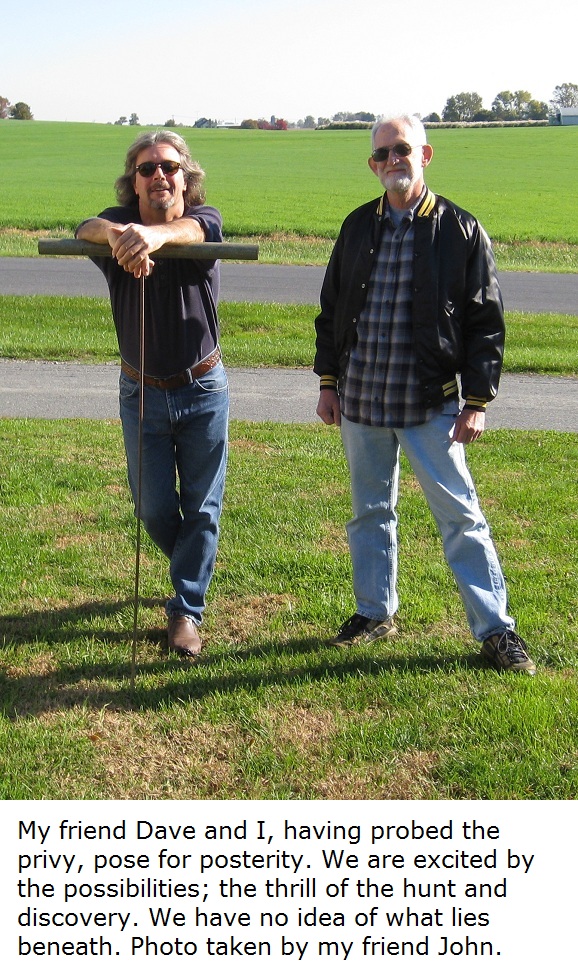 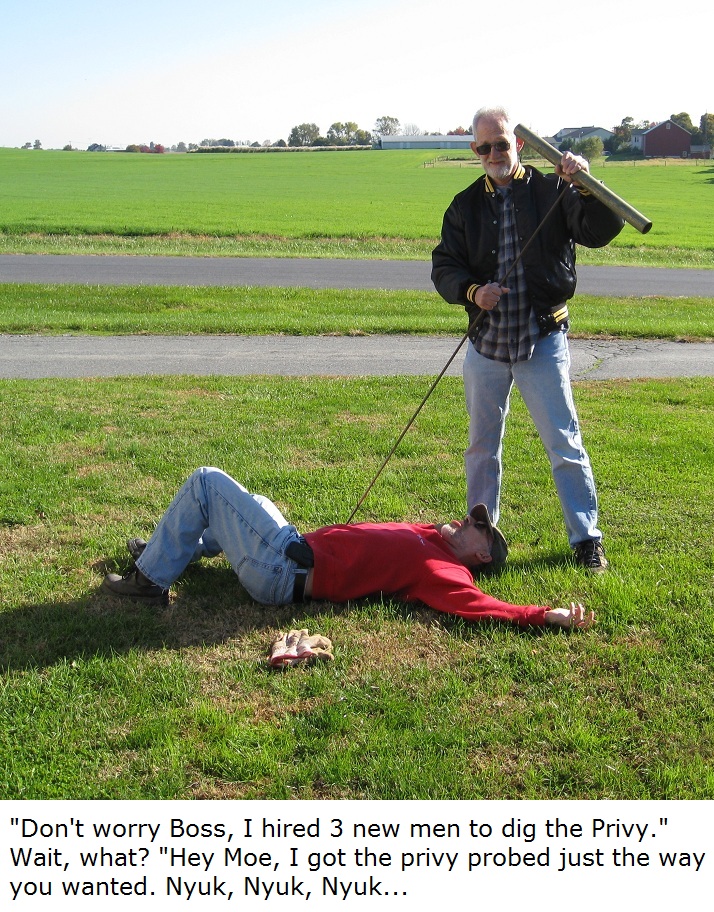 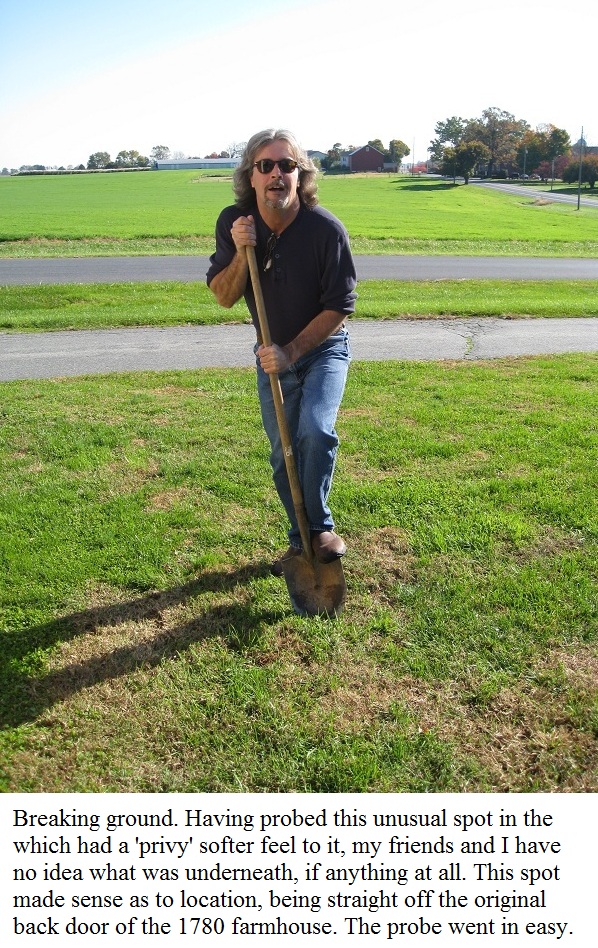 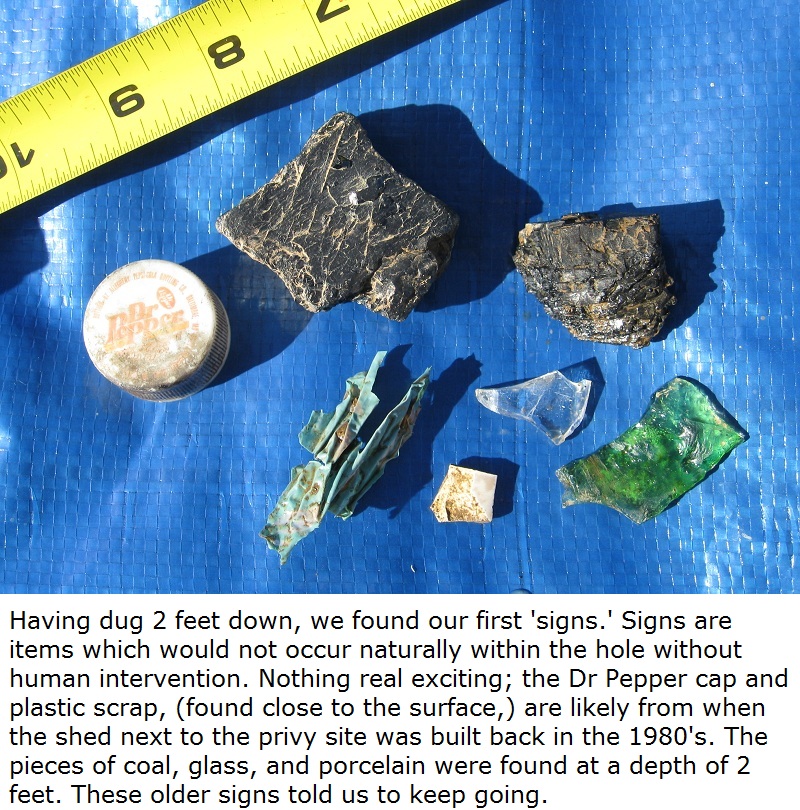 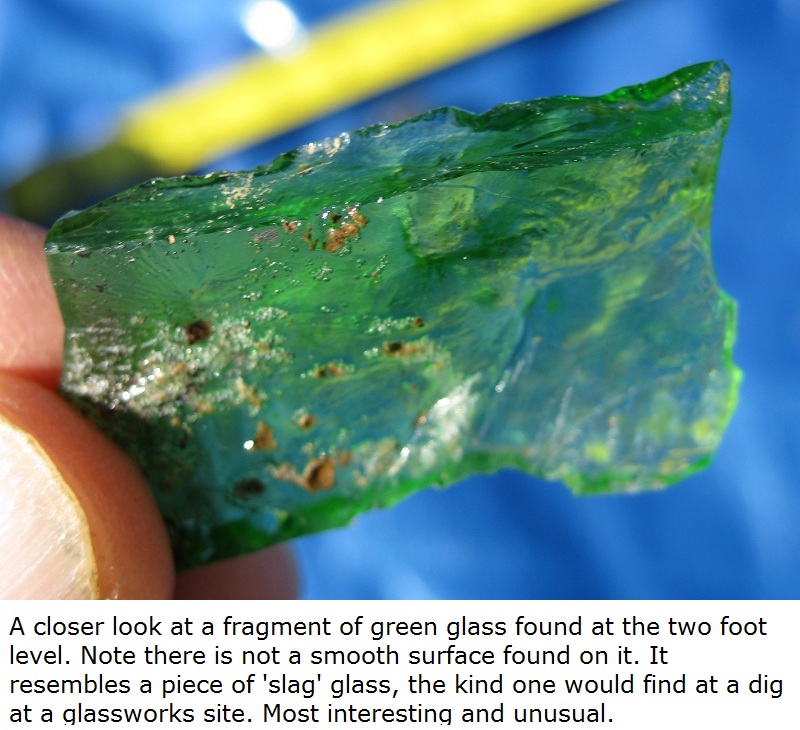 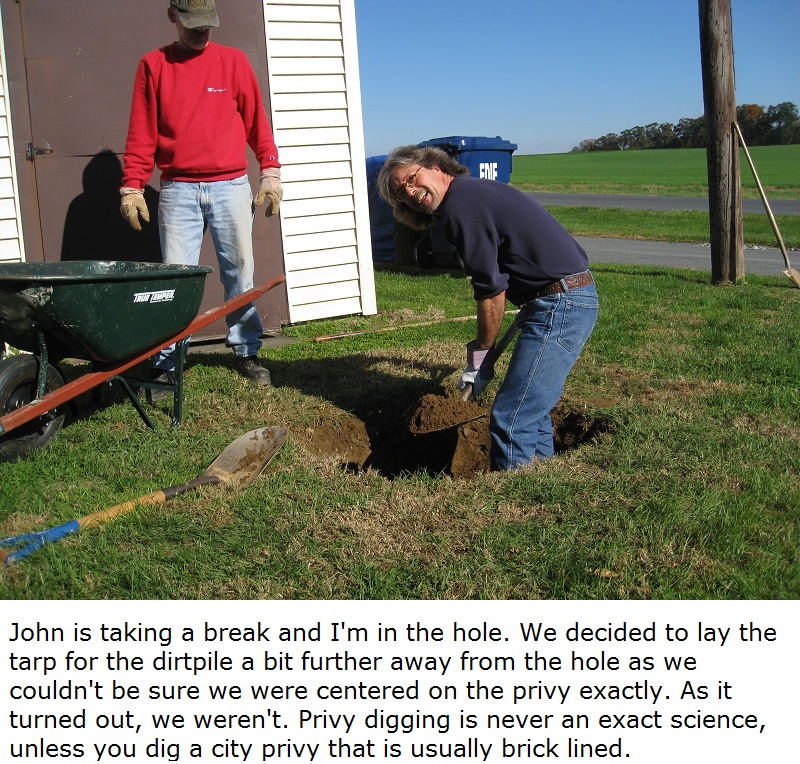 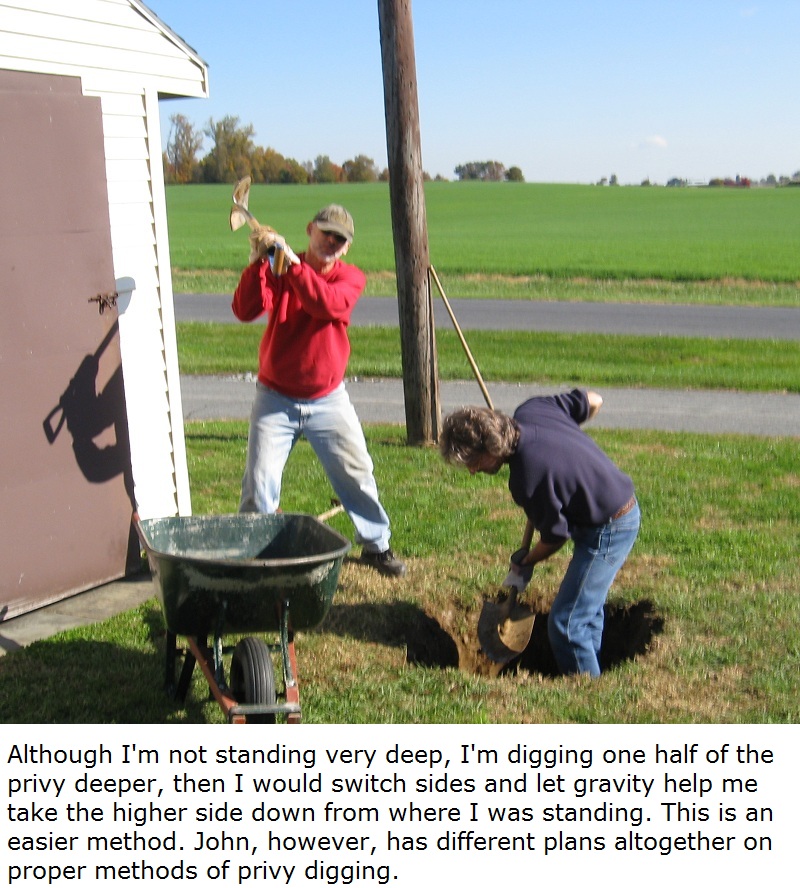 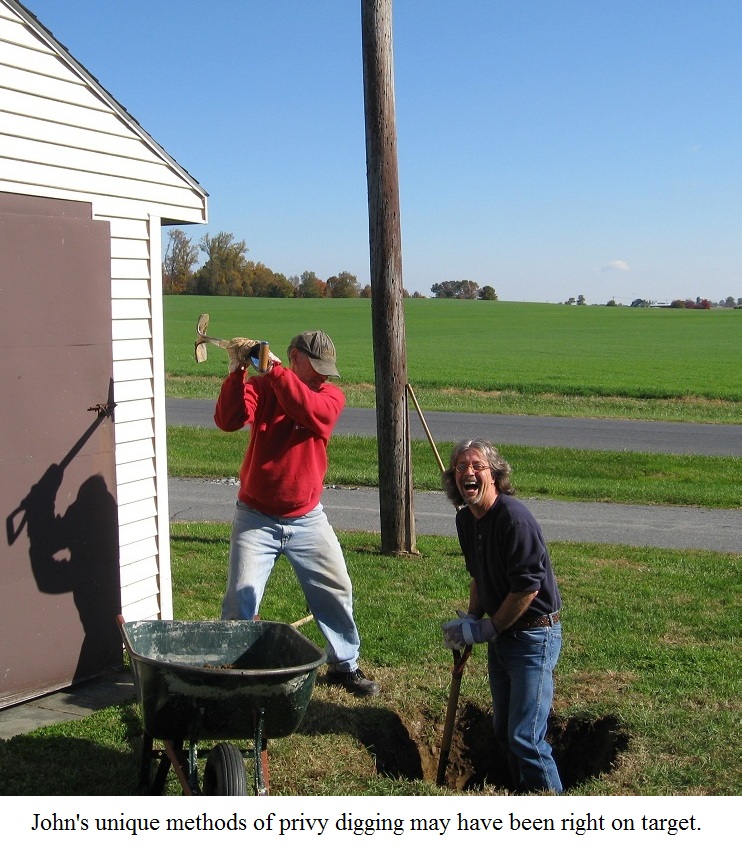 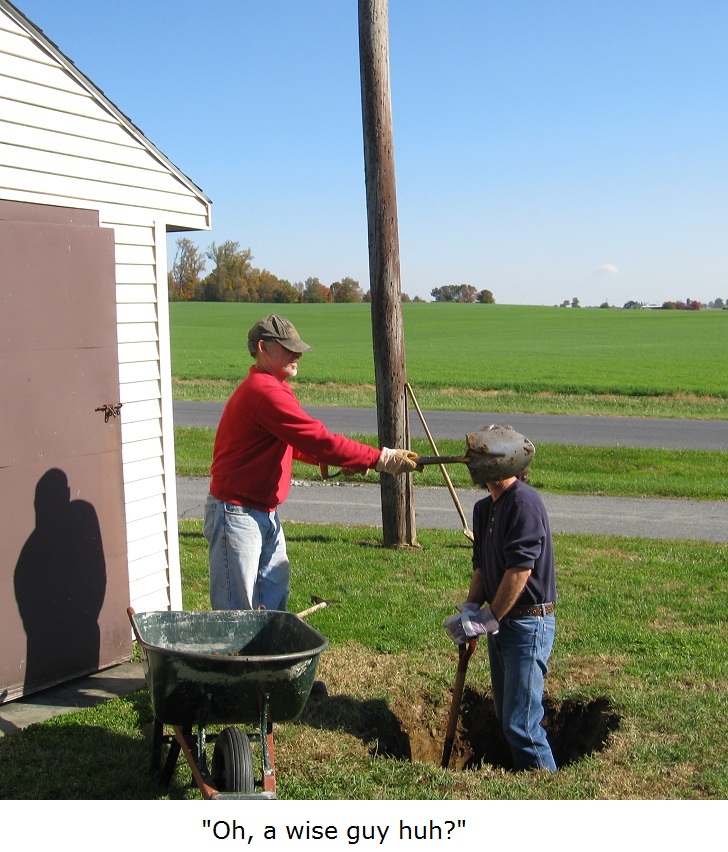 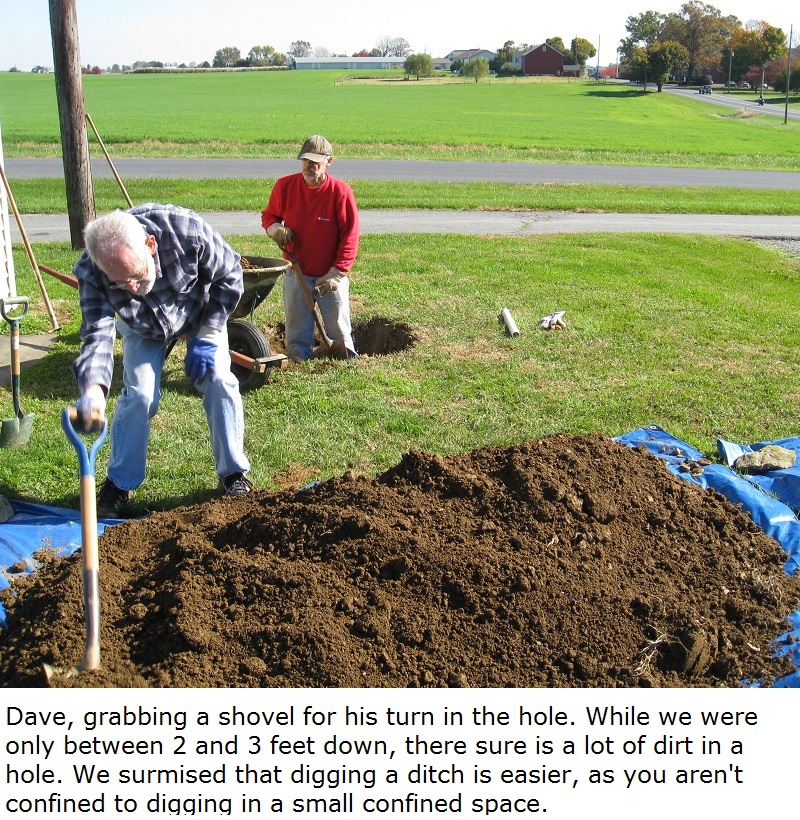 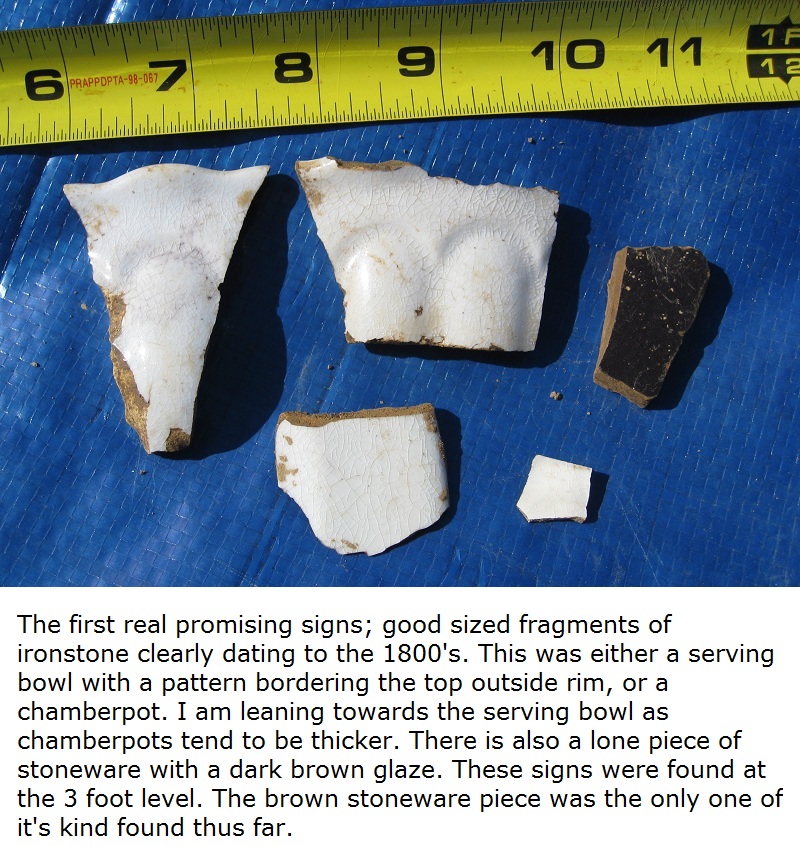 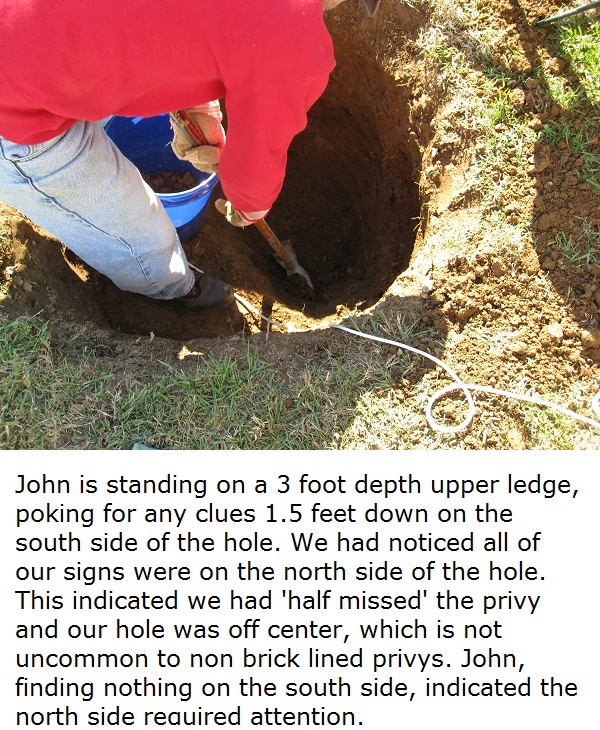 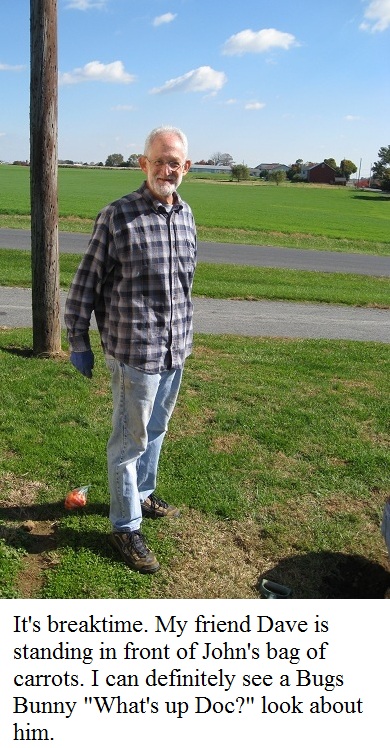 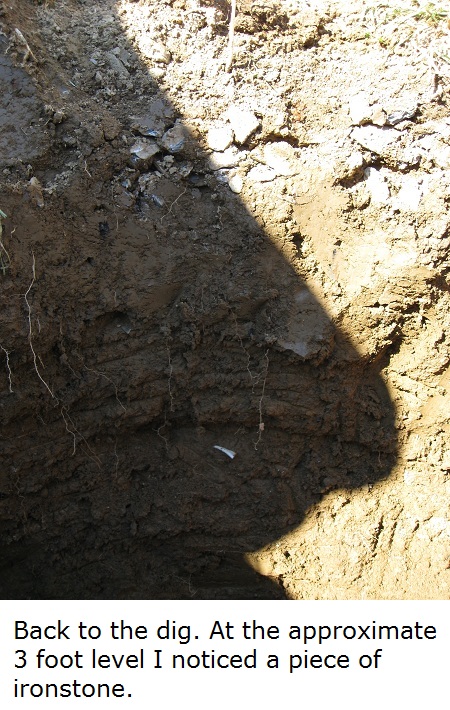 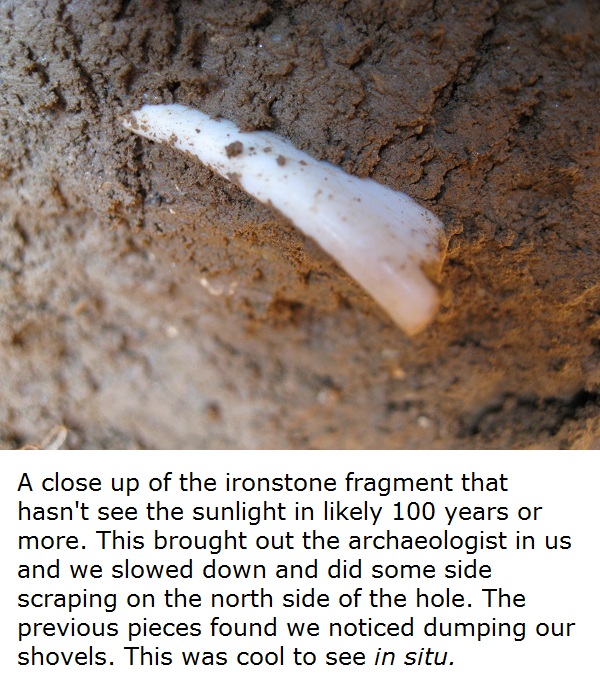 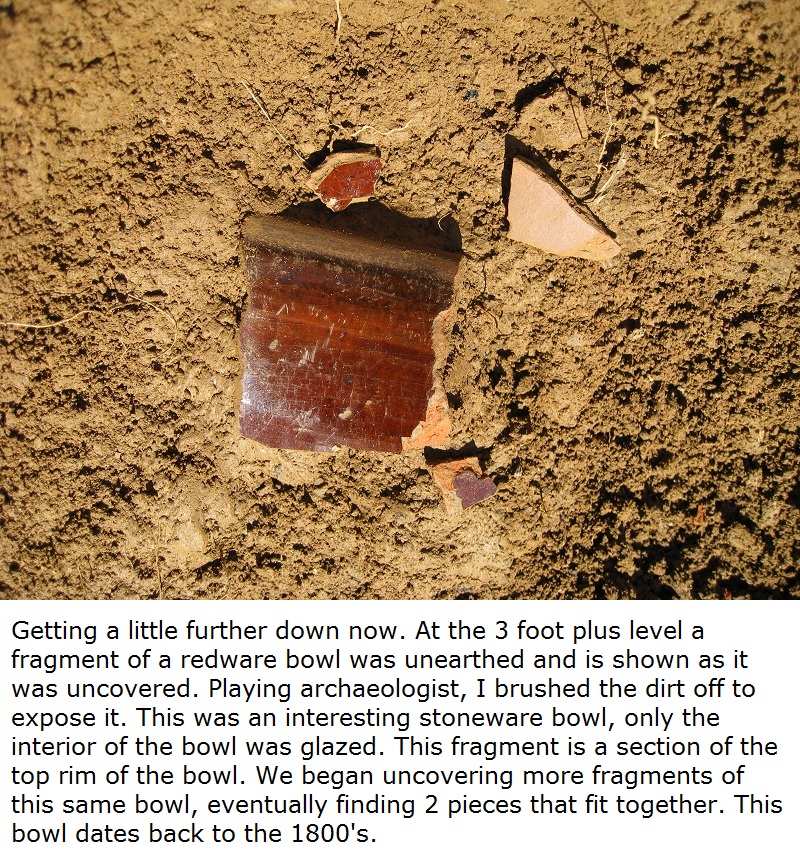 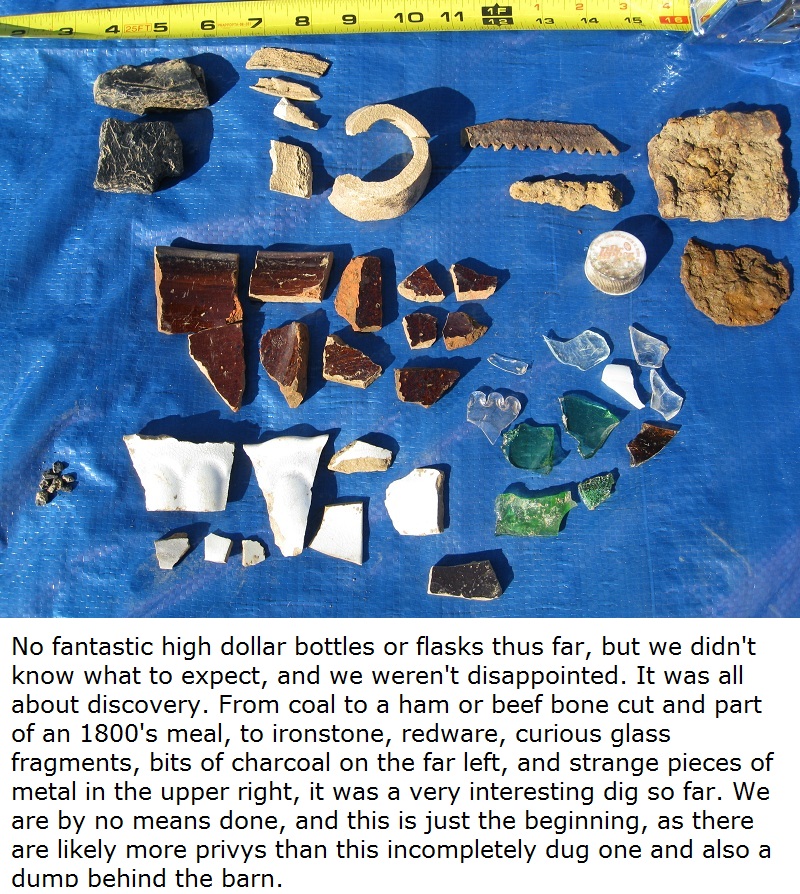 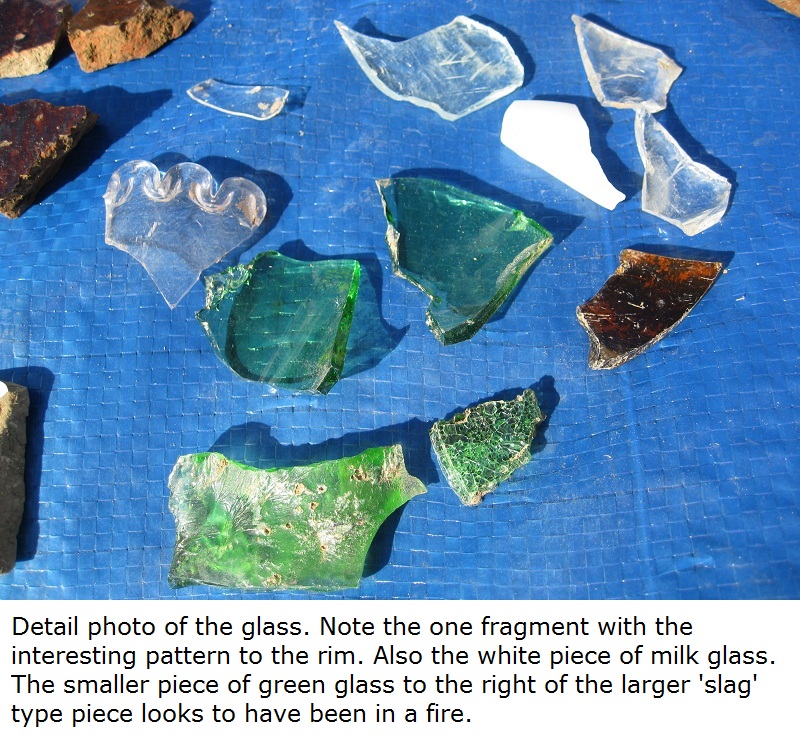 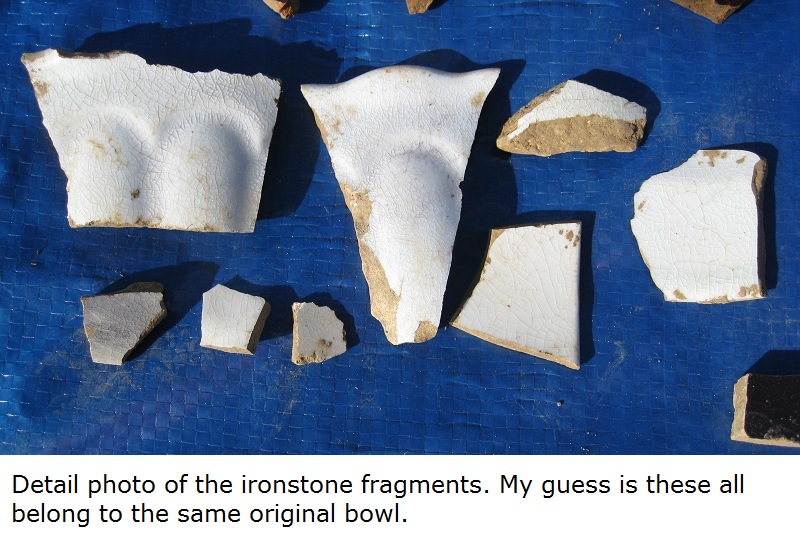 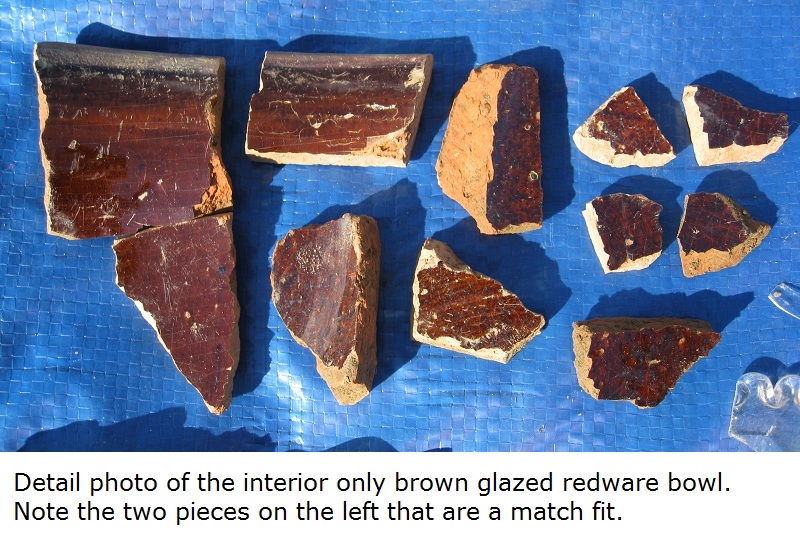 The Finish Line; 6 feet down and no more signs

We gave it a last attempt and went into the north side of the hole where the signs were and down to the 6 foot level. There were no more signs of human use below the 3 foot level, where we did find some more of the redware bowl we had been previously chasing along with more glass shards. But even that interesting factor of the redware bowl wore off with the physical work this hole was. Below is a shot of the interim hole safely taped off and a shot of a larger last piece of redware, (of several more we uncovered,) at the 3 foot depth. 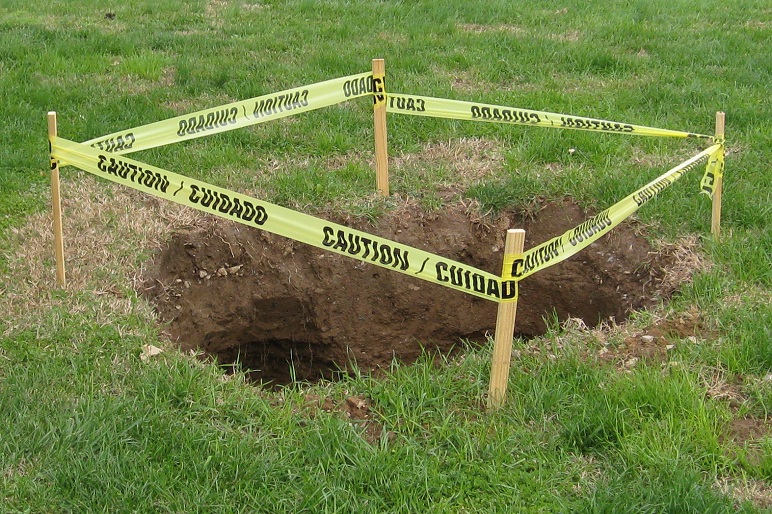 If this privy was dug prior to our dig, then the signs such as the redware and ironstone and glass would be at scattered levels, but they weren’t, they were all at the same level. This ‘Privy,’ was, and is a mystery, and represents the typical farmhouse rural privy in which the trash was likely all thrown into the dump with the privy itself having very little to show. We “made our Bones,” so to speak with our first privy dig, and the property owner is locating old pictures he has from the previous owner that may lead us to better chances of locating more ideal locations on the property that will put our hard efforts to more fruitful use.

We now have a permission to dig an “in town” privy in Mountville,  a town founded in 1815, and the house dates to the mid 1800’s. Stay tuned for that as that will definitely have much more interesting and serious finds for the work involved. Of course we’re waiting for Spring as we’re just not that hard core. 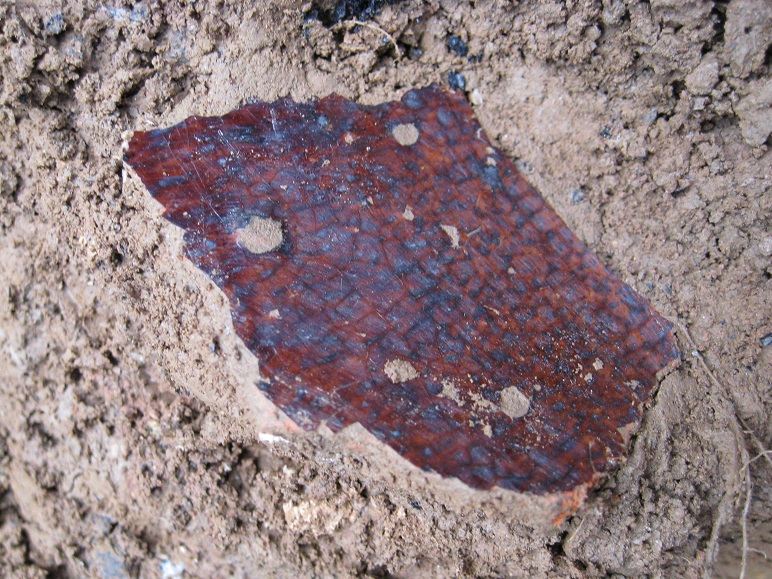 The last of the “Redware Bowl Hole,” although interesting and quite the learning experience; I guarantee the next dig will be something more to write home about.