A Rare Second Chance at the Color Purple

A couple years ago on a Sunday daytrip, pickin’ over in Hershey, Pa, I picked up a most interesting and ancient purple flint glass bowl. The only problem was, I set it back down. There were condition issues and it was twenty dollars. Although knowing it was really unusual, at the time I thought more about the price than the piece.

Back home that evening, I was still curious about it and perused my copy of American Glass by George and Helen McKearin. I noted very rare 1820’s examples of early Boston & Sandwich glass with virtually identical characteristics, but no exact match to the purple bowl. I was more interested in it now and regretted not getting it. Like all those fish tales you hear, it was the one that got away. 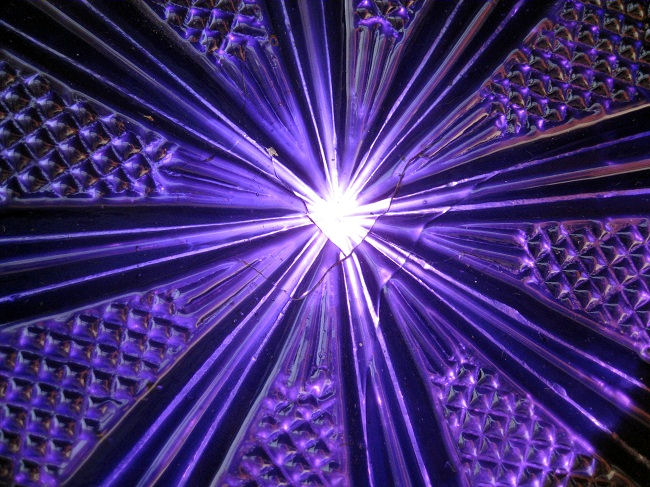 Little did I know, the rays of the glass gods would be shining on me. I had been back to my pickin’ haunts in Hershey a few times and the mystery purple bowl had been a long time gone. Unbelieveably, about a year later, in another store in Hershey, I came across it again. A rare second chance that caused me pause. Not only that, it was only ten dollars this time.

It was the identical bowl, of that, there was no doubt. I had noticed it had a very hard row to hoe the first time I saw it; it clearly dates to the 1820’s and the base had separated at some point long ago and had been expertly reattached. The base condition had bothered me a little the first time I saw it, but now, for only ten beans, I snagged this very early and very unique eight sided purple flint glass bowl. It’s quite thick and heavy and weighs at least two pounds. 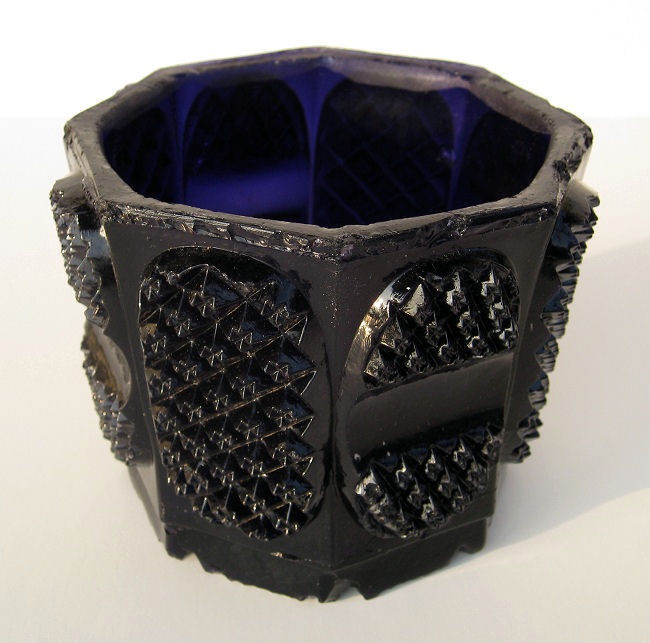 This bowl is as purple as violet, but my camera wants to see more blue. The bowl is very early and crude and the patterns are very rough and sharp. When held in your hand, this is one piece that will not slip, it grabs at your skin. It stands just shy of 4″ and is 4-1/2″ across the top. Some collectors prefer perfection only. I collect what fascinates me. Even if this was just a shard from a glasshouse archaeology dig or a privy; just like a hologram photo fragment, to me anyway, every part does indeed contain the whole. 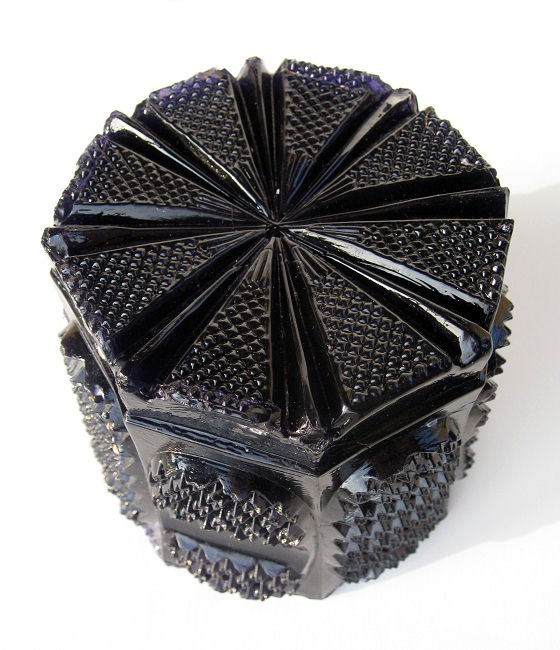 I had noticed two prominent pattern characteristics of Boston & Sandwich examples along with it’s thick and heavy style which compares to a very rare midwestern piece shown below. 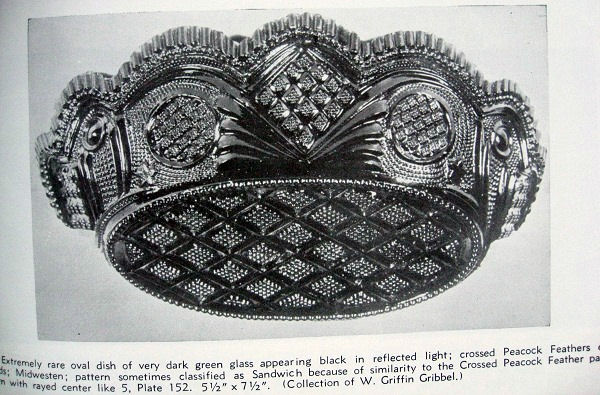 The rayed center McKearin refers to in the above photograph is attributed to early Boston & Sandwich. The rayed center in this crude purple flint bowl is a bit off center as you can clearly see in the pictures. Below is a comparison shot of my bowl and #5, Plate 152, a sauce dish from Boston & Sandwich which dates to around 1827. The crudity of my bowl alludes to me it may date a bit earlier. Note the nearly identical rayed base styles. 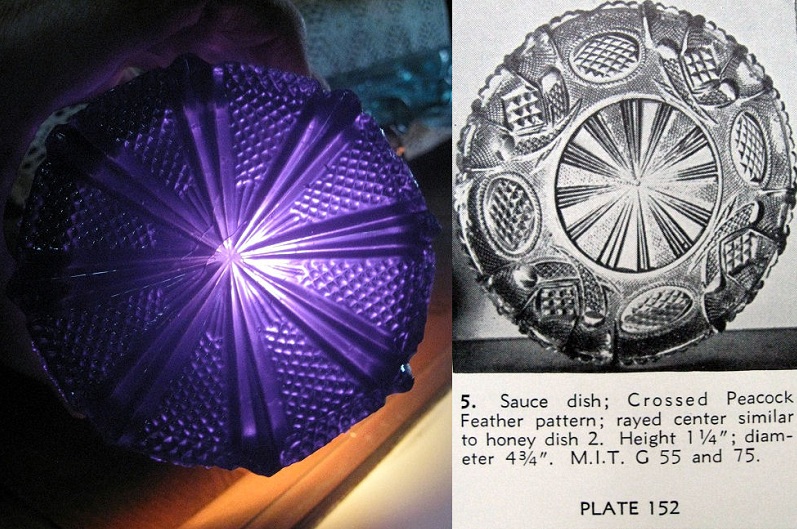 It’s like playing ‘Detective’ with clues. So far we have a nearly identical base style with an 1820’s Boston & Sandwich example, but what about the quilted diamond pattern? 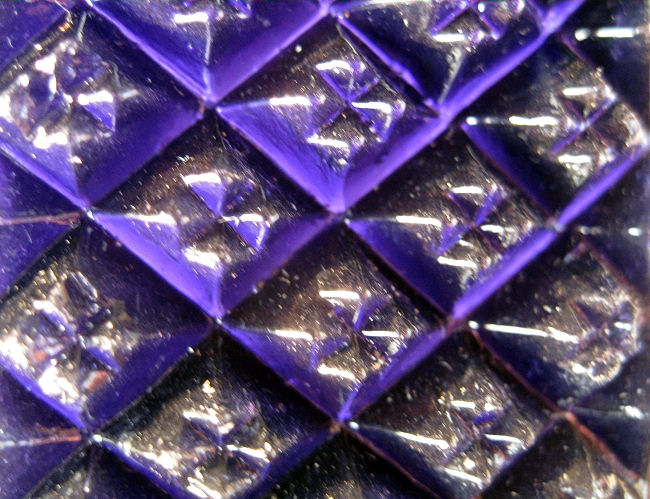 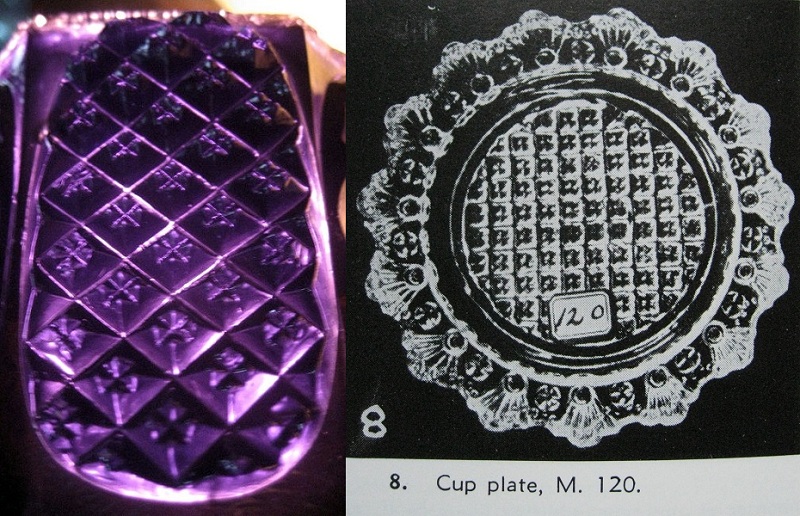 Yes, I do believe we have a match there as well. I’m giving the nod to Boston & Sandwich on this piece. It’s possible it could be midwestern made, but either way, it’s quite an amazingly old and very rare colored flint glass bowl. And the color. Did I mention the color? 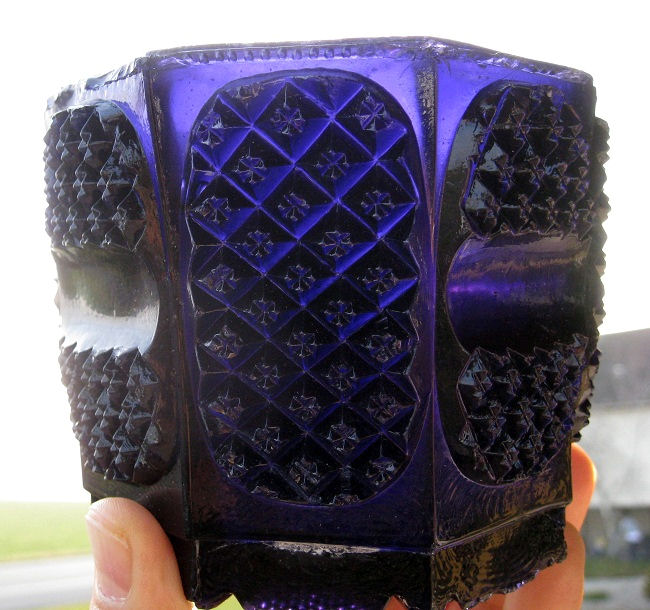 This time I got lucky. The next time I’ll spend the twenty beans the first time around. This rare second chance won’t happen again.