Old Glass With Ironsides of Wood 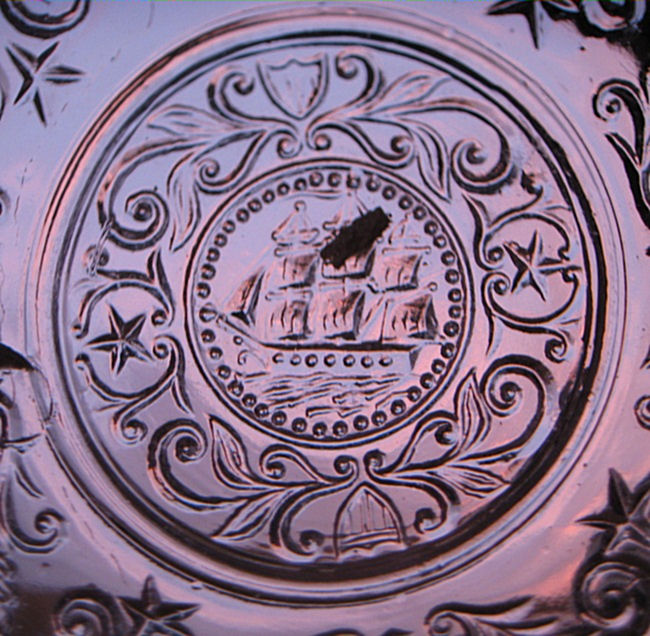 There are only two categories in the genre of antique glass that truly capture history more than any other. The first, of course, is historic bottles and flasks. For most of the Nineteenth Century, presidents, politicians, battle quotes, monuments, any kind of significant person or event, the building of the railroad, clasped hands signifying the end of the Civil War; most anything of a historic nature has been commemorated on a bottle or flask. These bottles and flasks were issued in an amazing array of shapes, sizes, and colors, and are highly sought after by collectors, many of whom pay dearly for the rarest examples.

There is a second category of antique glass that’s seen it’s collectibility seemingly fallen by the wayside, despite it’s items being made in the most variety of patterns and colors; both conventional and historic, these patterns numbered in the thousands and also commemorated very similar historical events and people as did the bottles and flasks.

What is this second most historical glass category?

What are cup plates? Well, basically, they are exactly as stated; small plates one would set a teacup on as not to stain linen or damage fine table wood. In the early days of our acquiring a taste of the Asian treat of tea, our tea cups had no handles. Instead of drinking tea as the folks from the Far East in thick shallow bowls (that are actually quite similar to ones used today in Asian-American restaurants) we used handle-less cups with saucers that were more bowl-like and when we poured the tea into the bowl-like saucer to cool, it was sipped from there. Because the cup was too hot to be held for long, a place was needed to set the hot cup upon, hence the need for a cup plate. The very first cup plates were made of earthenware, but with the invention of the glass pressing machine in the 1820’s, flint glass cup plates were produced by the thousands. 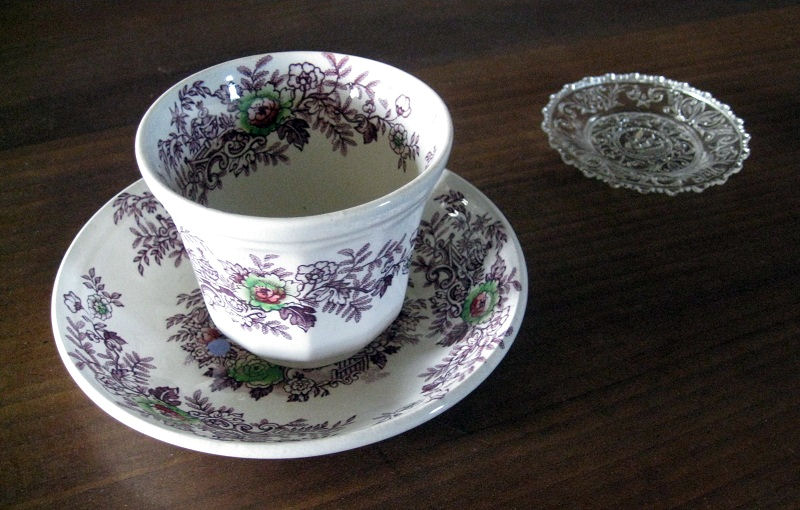 The only thing missing is the tea. This is a handle-less cup and saucer set dating to around 1840 made by Josiah Wedgwood; the pattern is a lovely Mulberry Tyrol. This would have been Josiah the Third. (Author’s interesting note: Josiah Wedgwood the First’s daughter, Susannah, gave birth to Charles Darwin on February 12th, 1809.) 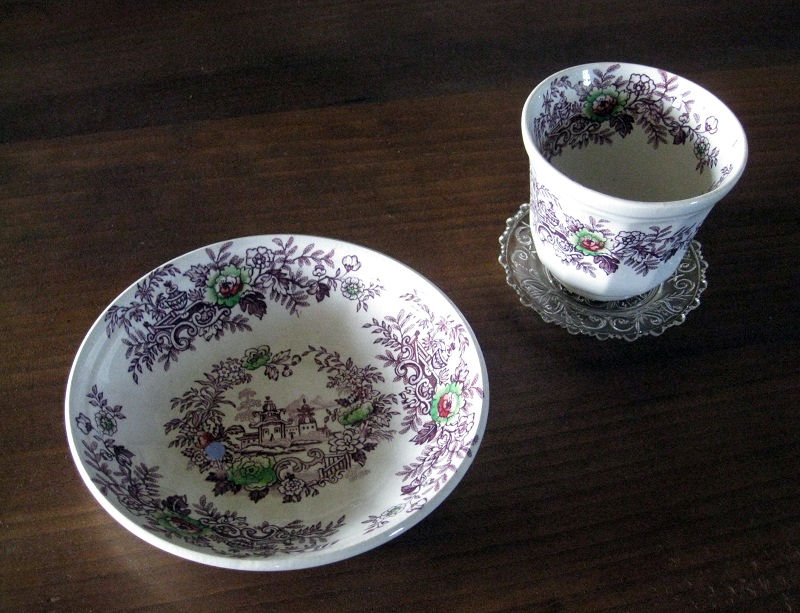 The setting as it would appear with some tea cooling in the saucer and the cup plate protecting the table surface from the hot or wet based cup. 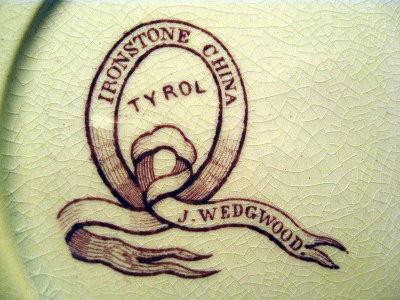 Cup Plate History not Found on any Bottle or Flask 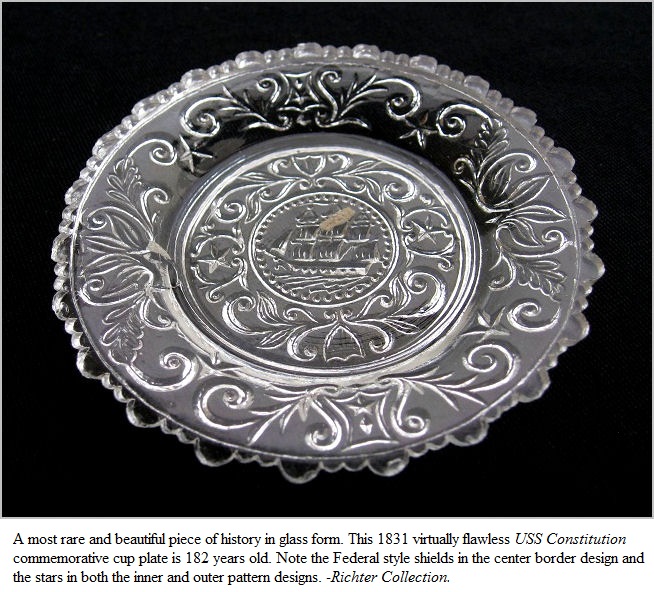 A Most Historic Ship

In the past 200 years, countless ships have been built, most of which have sunk or been scrapped, razed and broken up, and no longer exist. Just like those ships, countless pieces of historic glass have also been produced and most have been broken or sunk into the ground or both.

Let’s take a historic look at one of each that are still with us today.

In 1794, in a Boston shipyard, the keel was laid for a most unusual ship which was completed in 1797. She was named the USS Constitution by none other than Founding Father and first President George Washington. She was designed to be long and narrow, as foreign navies had more ships than our newly founded country, so she had to be fast and maneuverable and built to hold 40 or more very heavy guns. Her side planking was dense southern oak from Georgia, and her sides were 21 inches thick. Her bolts and breastworks of solid copper were forged by none other than Paul Revere. She was some 204 feet long and 43 feet wide. A most beautiful ship. 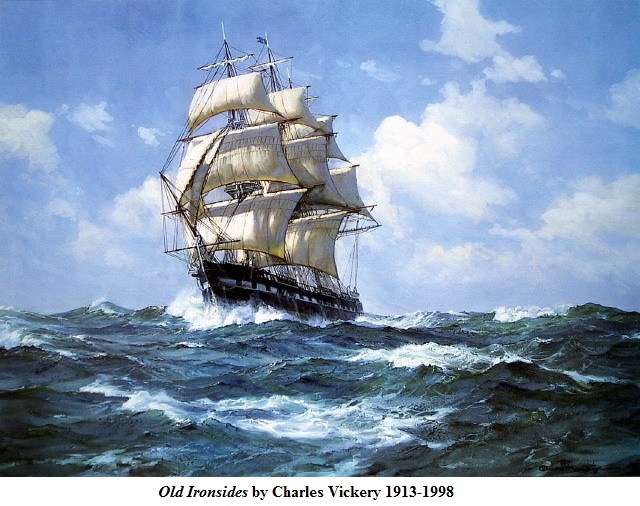 The War of 1812 and the Battle With HMS Guerriere

It was August 19th, 1812, when the USS Constitution found herself in the north Atlantic some 400 miles southeast of Halifax, Nova Scotia, when she encountered a British frigate, the HMS Guerriere, who was on it’s way to Halifax for refitting as the ship was badly in need of it; having been taken by the British from the French back in 1806. The two ships engaged each other. The Guerriere had turned a couple of times and fired cannons at the Constitution, none of which did any damage, but noticing one literally bounce off the ship’s thick sides, an American sailor is reported to have exclaimed, “Huzzah, her sides are made of iron!” The name “Ironsides” would stick with her for the rest of history.

After catching up to the Guerriere, the Constitution came close and proceeded to open fire as the Guerriere did the same. The Constitution received little damage, however the mizzenmast (third mast) of the Guerriere fell and soon after so did the rest of her masts, rendering her unmaneuverable and helpless. The Captain and Officers of the USS Constitution graciously accepted the surrender of the British crew and set sail for Boston. (Author’s interesting note: This battle occurred and the HMS Guerriere went down not very far in nautical terms from where the Titanic would sink 100 years later.) 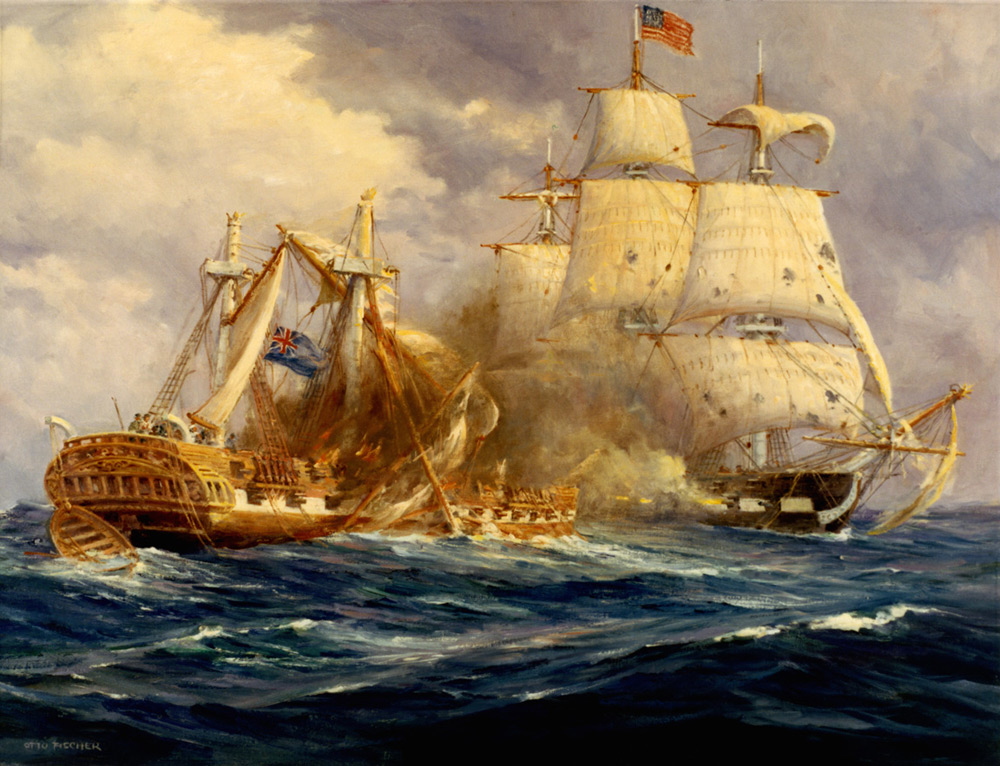 By 1830, Old Ironsides was considered well, old. For a 30 plus year old ship, it was normal for the Navy to render her either to be refitted or scrapped. The estimated cost for refitting was some $157,000.00.  At that time, on September 14th, 1830, a Boston newspaper reported in error that she was to be scrapped. The people of Boston were not happy to read this. Then only two days later, published in the same newspaper was a very moving poem by none other than Oliver Wendell Holmes. 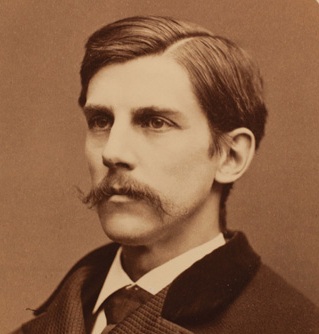 Aye tear her tattered ensign down
long has it waved on high,
And many an eye has danced to see
That banner in the sky;
Beneath it rung the battle shout,
And burst the cannon’s roar;–
The meteor of the ocean air
Shall sweep the clouds no more.

Her deck, once red with heroes’ blood,
Where knelt the vanquished foe,
When winds were hurrying o’er the flood,
And waves were white below,
No more shall feel the victor’s tread,
Or know the conquered knee;–
The harpies of the shore shall pluck
The eagle of the sea!

Oh, better that her shattered hulk
Should sink beneath the wave;
Her thunders shook the mighty deep,
And there should be her grave;
Nail to the mast her holy flag,
Set every threadbare sail,
And give her to the god of storms,
The lightning and the gale!

The poem was picked up by newspapers nationwide and the American public was not keen at all on the possible scrapping of the glorious ship. Decidedly, she would be refitted after all. (It may very well have been the intent of the “harpies of the shore” all along.)

A Very Funny Thing Happened on the Way to the Refitting

In charge of the refitting and Captain of Old Ironsides was Jesse Elliott, a ‘Jacksonian Democrat.’ This is where things get historically, and hysterically funny, considering most Bostonians at that time weren’t too particularly fond of Andrew Jackson. During the years it took for the refitting, good old Captain Elliott decided a new bowsprit figurehead was needed for Old Ironsides. He unwittingly ordered for the USS Constitution’s bowsprit a full figured likeness of none other than Andrew Jackson himself. This did cause quite a local uproar of sorts and Captain Elliott refused to change his mind and had guards posted at the ship at all times. 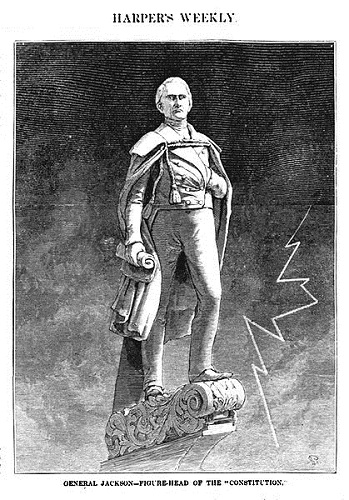 Once the bowsprit of Jackson was installed, a wager was apparently made, likely over drinks in a tavern. In acceptance of the wager was a local Merchant Captain Samuel Dewey. During a night full of thunderstorm, Dewey rowed to the heavily guarded ship, quietly climbed to the bowsprit and sawed off the head of Jackson. Reportedly, it was bandied about in local taverns and quite a few laughs and other words were heard. Eventually, it was Dewey himself who returned the sawed off wooden head to none other than the Secretary of the Navy, Mahlon Dickerson, who, not being really sure what to do with it, set it on his library shelf, where it remained for years. With the refitting complete in 1835, a miffed Captain Elliott set sail for New York, headless Jackson and all, where he had the bowsprit restored.

The public sentiment over the possible scrapping of Old Ironsides caused even glasshouses to take notice. This lovely little gem of a flint glass cup plate was pressed in 1831 in the Boston area by their finest glass company, Boston & Sandwich. There are also two known salt dishes made by the same company which depict the USS Constitution. There is only one other cup plate featuring this ship known, which is attributed to manufacture in the midwest and is also very rare. This example shown below is 3-5/8″ across and is actually pressed quite crookedly. (The 9:00 side sits much higher than the 3:00 side.) 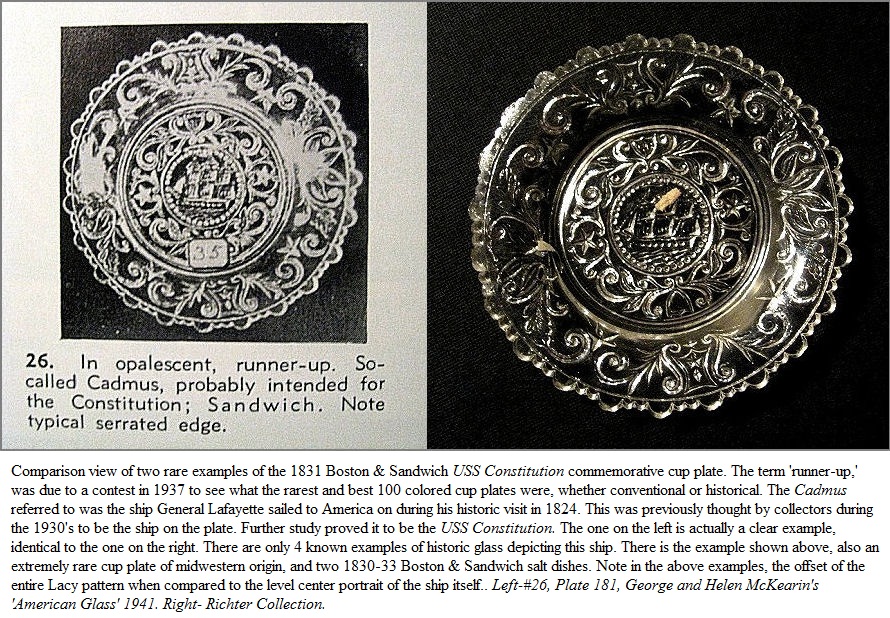 Throughout her 200 plus year history, she’s sailed almost everywhere and has been refitted numerous times. More recently, in 2010, she was refitted to resemble exactly as she appeared in 1812 when she performed so gallantly in what some historians call, ‘our second war for independence.’ She is docked in Boston, and is fully capable of sailing under her own power and she still does when holiday celebration expects, (especially July 4th) or if the Navy simply wants her to. She’s the oldest commissioned ship in the world and has her own museum not far from her landing. Whenever she sets sail from her dock, she is returned to it facing in the opposite direction so she can weather evenly. She is Captained by her 72nd Commander. 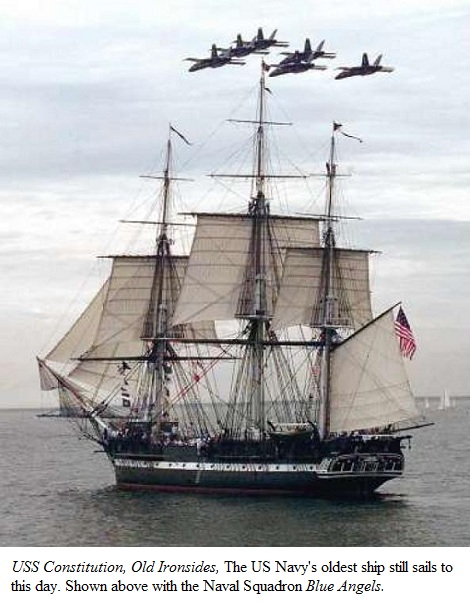 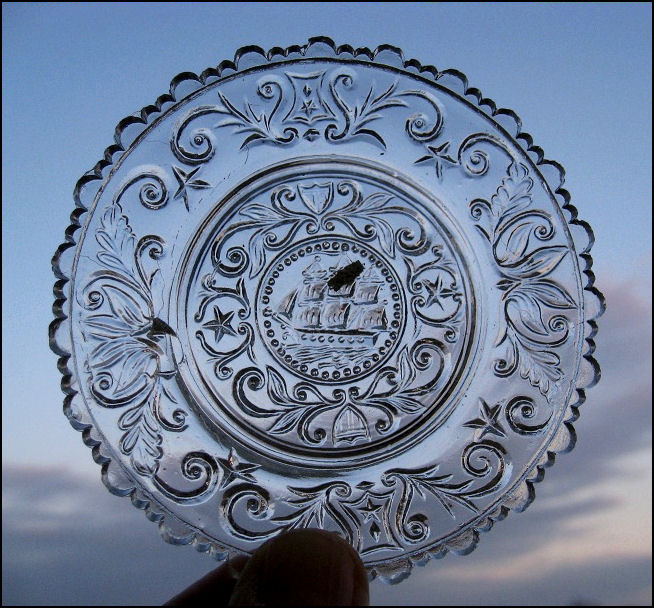 Two beautiful pieces of American history, both made in Boston.

One sits docked there in wood, one sits on my coffeetable in glass.

Both make my imagination set sail.