Finding the Deals on Cool Colors

The elusive “They” say the best things in life are free. Maybe so. Even with collecting glass, both old and new; I’ve found on frequent occasions the best things can be almost, or figuratively, free. Most antique bottle collectors, (like yours truly) are working class folks. I’d like to impart to those folks like me, that yes, there is a lot to be had out there that is well within your financial means.

Featured below are some absolutely beautiful examples of many styles of 1800’s bottles, an example of a very common 1930’s bottle in an extremely rare color, and the cutest reproductions in a color run that you’ll ever see. All were acquired for very little money. Collecting on a budget is anything but limiting. You may be very surprised by what is out there and the fantastic finds waiting to be had by the patient picker. None of the bottles below were found in thrift stores, yard sales, or flea markets. These were all found in antique stores. Remember; it’s the dealers or sellers job to know what they have before they sell it. If they didn’t do their job, then it’s your job to happily do it for them and reap the rewards. My motto is: If your wallet’s skinny, shop with your wits.

I was in Shrewsbury, Pa, not far from the Maryland border where members of the Bottle Club in Baltimore pick frequently. Not letting this deter me, I went about my picking and came across a most unusual and unique bottle. It was a dark colored, turn mold, applied top, 1880’s unembossed whiskey bottle. I picked it off the shelf, noticing it was in attic, perfect, condition. I walked to a window held it up and was quite surprised at the most amazing color. The bottle was blood red. This was no common 1800’s whiskey. The price? $2.00. 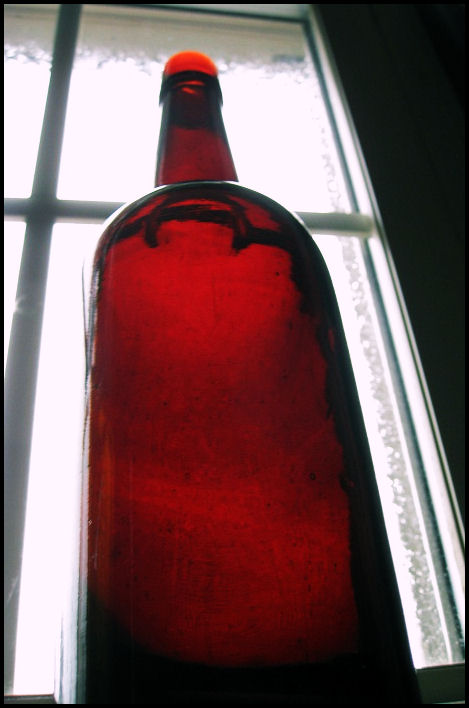 Standing tall in the window against the onslaught of the October “Frankenstorm.” 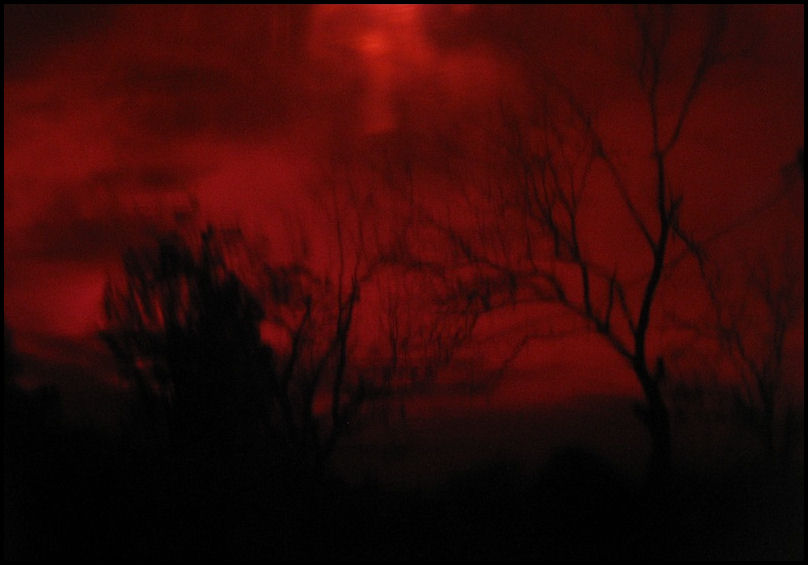 Looking through the bottle is amazing, the color is such a rich blood red.

This was found in a local antique store within five miles from my home. Amber 1800’s whiskeys are the norm and are common as weeds, but I was fast to see this quite unusual exception and latch onto it and not let go, especially after seeing the $5.00 price tag. The bottle is clean and perfect. 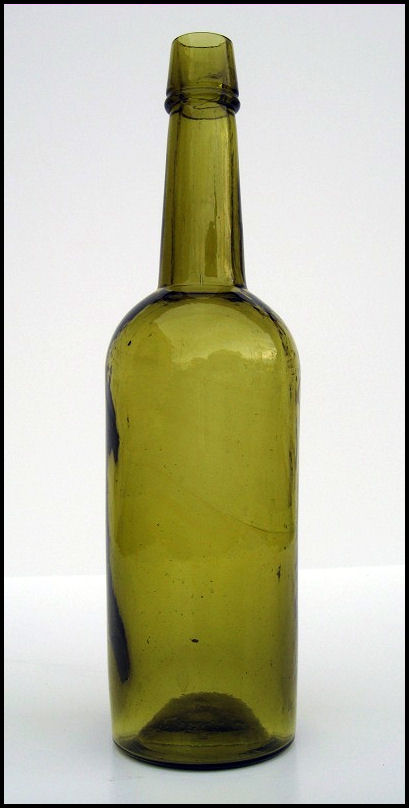 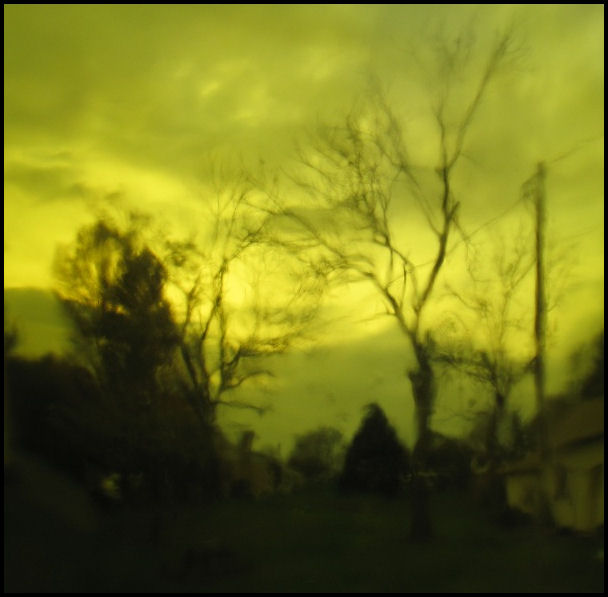 These are what I consider “Poor Mans Bitter Barrels.” These were “sleepers” for a long time and I always grabbed them when I found them. I don’t recall paying more than $38.00 for one, though the one in the very back of the below grouping is open pontil and was only $8.00. They are usually always found in shades of true green, the most common size being the large half gallon, then quart to pint size, (the smallest being the rarest.) The large dark example is a very unique color which is not an olive type. It is a color I can only refer accurately to as “Electric Swamp.” It’s a swamp green, but when the sunlight hits it, it lights up electric. I’ve heard that there are aqua examples out there, but I’ve yet to see one. These are only now coming into vogue and I saw a quart size green one for $80.00 at a bottle show. I’m glad I got in on the ground floor with these as not being a figural bitters collector, I find these 1800’s barrels quite beautiful. 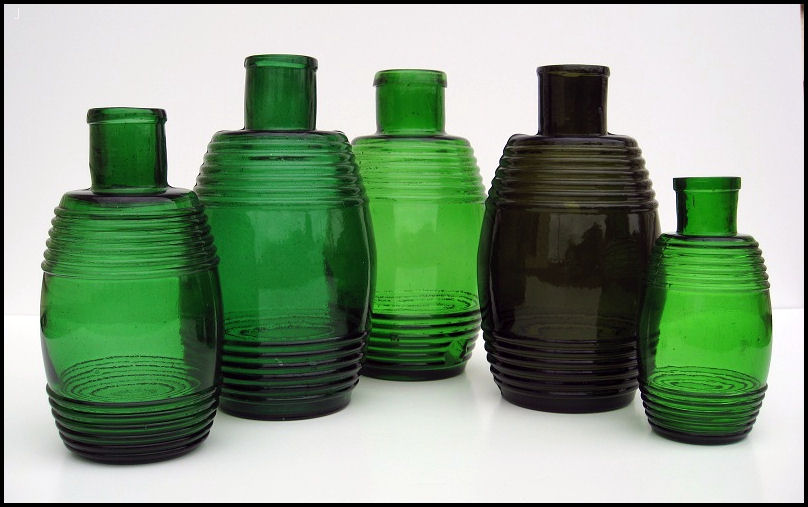 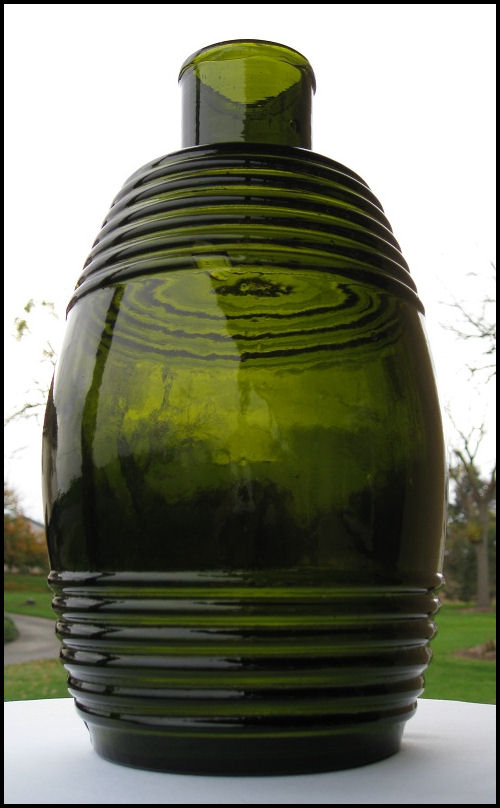 There is no other type of antique bottle that takes your hard earned dollar farther than demijohns will. Even the oldest free blown examples can be had for a steal of a deal. These small, meduim, and very large bottles held anything from wine to vinegar, molasses, you name it. The variety and colors are endless. Not too long back I found an 1840’s aqua one close to five gallon capacity that was entirely free blown with a pontil bigger than my fist. (Shown below.) A bunch were consigned to an antique store and most were 20th Century water cooler bottles. Most were all priced at $200.00 or thereabouts. One of them I happened across was a very perfect, yet crooked, gloppy, free blown pontil 1840’s killer example for a mere $35.00 and, I was given 10% off on top of that. A non-stained, clean beauty. It stands 21″ high and is over 9″ in diameter; it’s a big one. 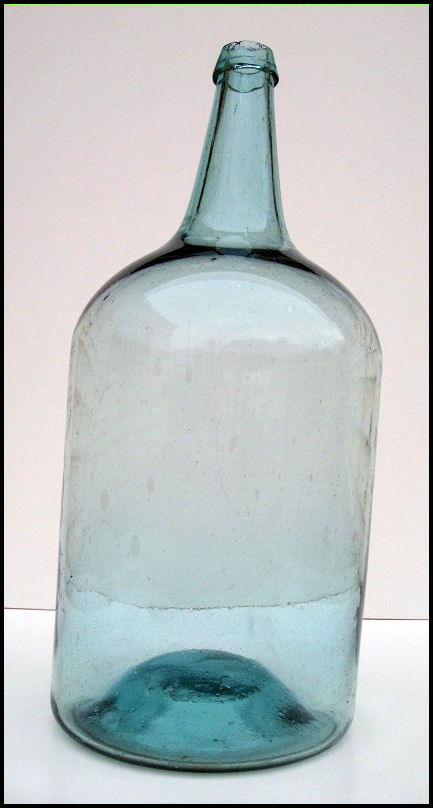 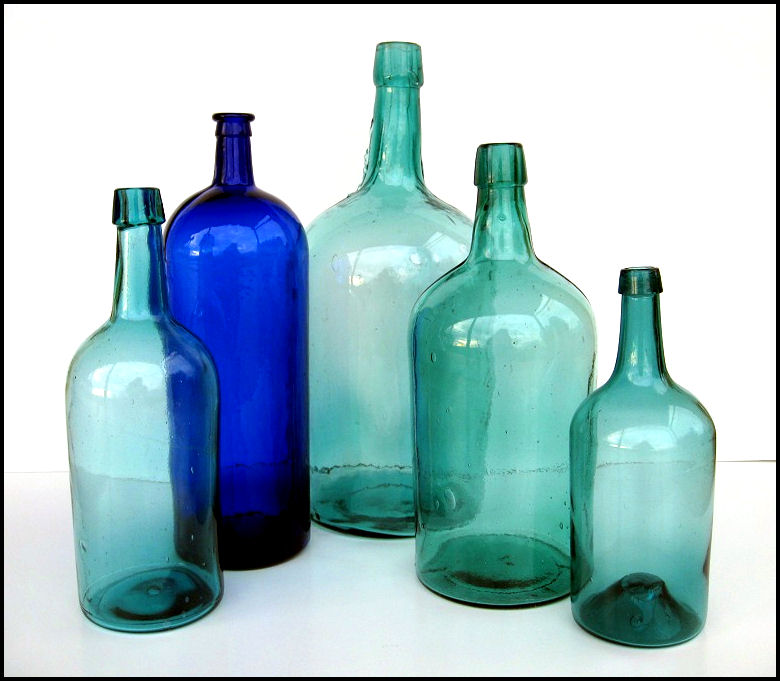 “It’s not easy being green” and a champagne gold…. 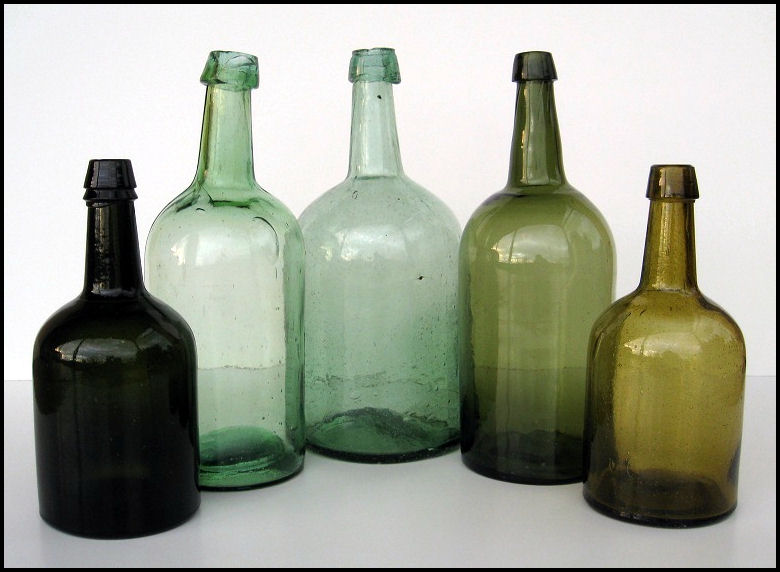 Amber Demijohns, the magnificent two toned yellow one was only $4.00… 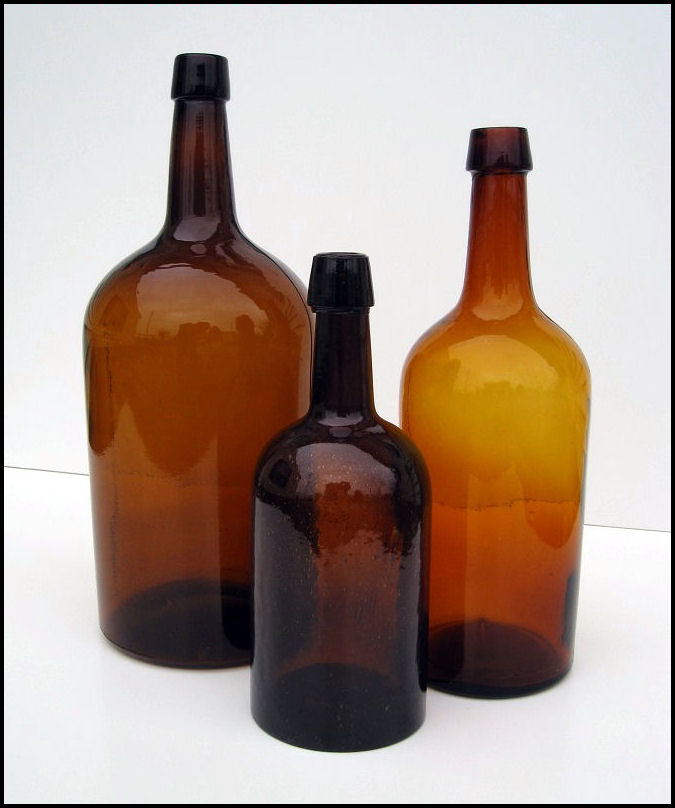 These are not rare, but make great display and accent pieces for decorating. They are referred to as strap flasks due to the extra thick band or strap on the sides for added strength. These can be had for as little as $3.00 to $15.00 for the green one. They have been getting more popular recently. 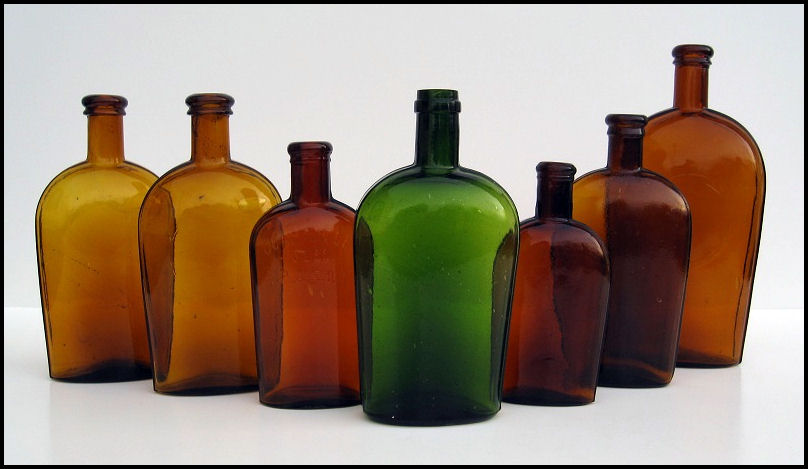 These are common as dirt in the dark amber color. The yellow Topaz is another story entirely. The aqua one is not often seen and may have been a Canadian issue only. This is a very interesting color run, as I doubt a color run in this common of a bottle is persued. I happened across the Topaz one and went from there. This was $17.00. A very pretty set. 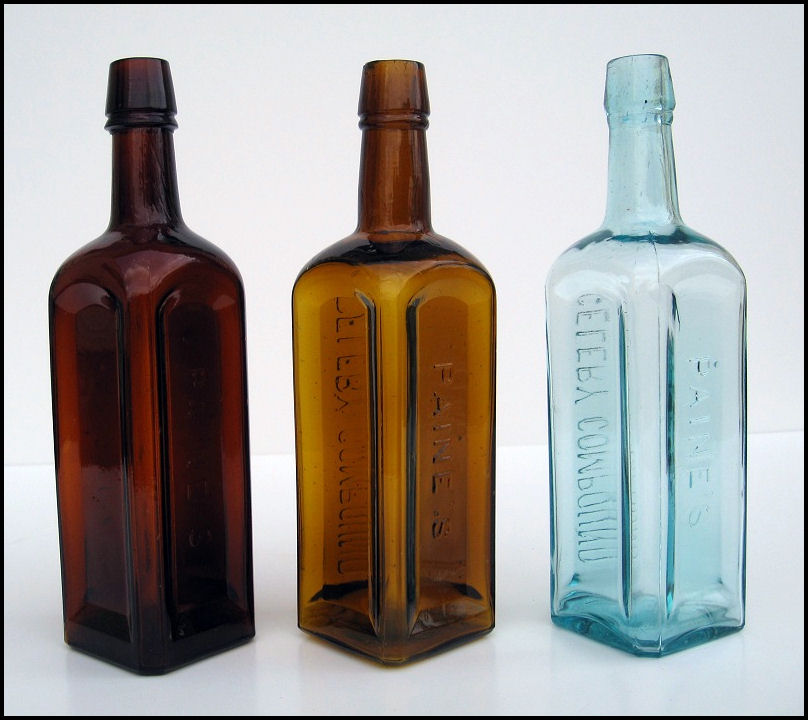 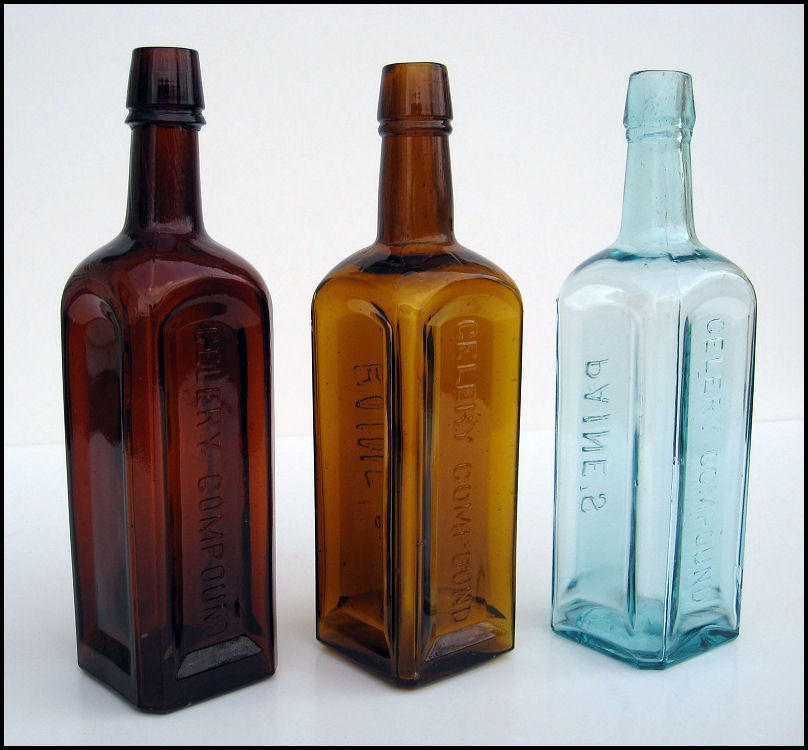 I almost missed this one. I saw it in the back of a dark cabinet in a nearby antiques store and it looked like the typical aqua color. Two weeks later I was back prowling around and the gal with the keys to the cases happened to be nearby, so I asked to see it. Now usually, these are way overpriced in common colors such as aqua, green, blue, or amethyst, and can range from $30.00 to $60.00. Why, I don’t know, they’re not rare, they were made in New Jersey during the early to mid 20th Century. When the violin bottle came out of the dark, unlit case, I noticed right off it was not a common one. The green was a 1930’s Vaseline Glass, it has uranium oxide in it and glows under ultraviolet light. (Black Light.) The price sticker was $14.00. Of course I bought it. I later met an old Gal named Jill at a bottle show who’s collected violin bottles, or “Viobots,” all her life and she has 2 of these and told me one she saw one sell 10 years ago for $800.00. I’ve since bought a black light bulb and made a nice stand for mine. I’m not into 1930’s depression glass, but I think I’ll keep this one. 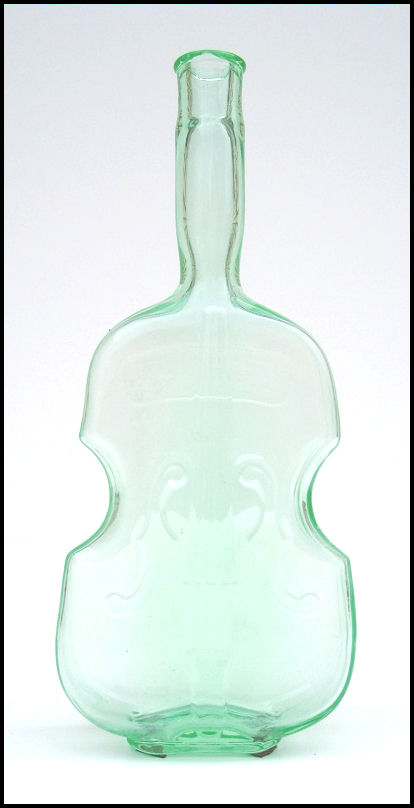 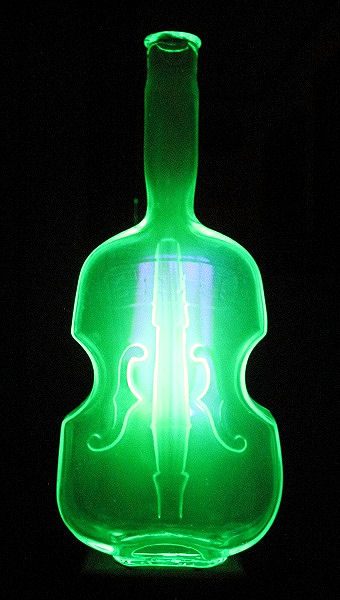 I love coming across these, and it’s not often when I do. These very primitive bottles are free blown into a cup mold. If you note the horizontal lines at the shoulders, that is what’s called “over-blow.” The outer two in the group exhibit this clearly; it’s a small over flow of glass when the top of the mold was reached. The shoulders and necks were entirely free blown and tooled and the top hand applied. These are from Scotland and the characteristics are quite similar with each bottle; note the bulbous neck and the classic Scottish/English top featuring a straight collar top with a sloped lower part. The colors are amazing, from the Honey one in the center which was only $8.00, to the medium 2 toned Amber Olive on the right which was $3.00, to the most expensive darker Yellow Olive one on the left which was $15.00. (The color didn’t denote the value, it just happened to be that dealer’s price, still a bargain.) For beautiful 1800’s amber-olive tones in any window, you just can beat these for the $26.00 spent. There’s something about colors that are only found in antique glass that I find amazing, and this trio shows a great example of that. The crude tilt and primitive bent necks are nice too. 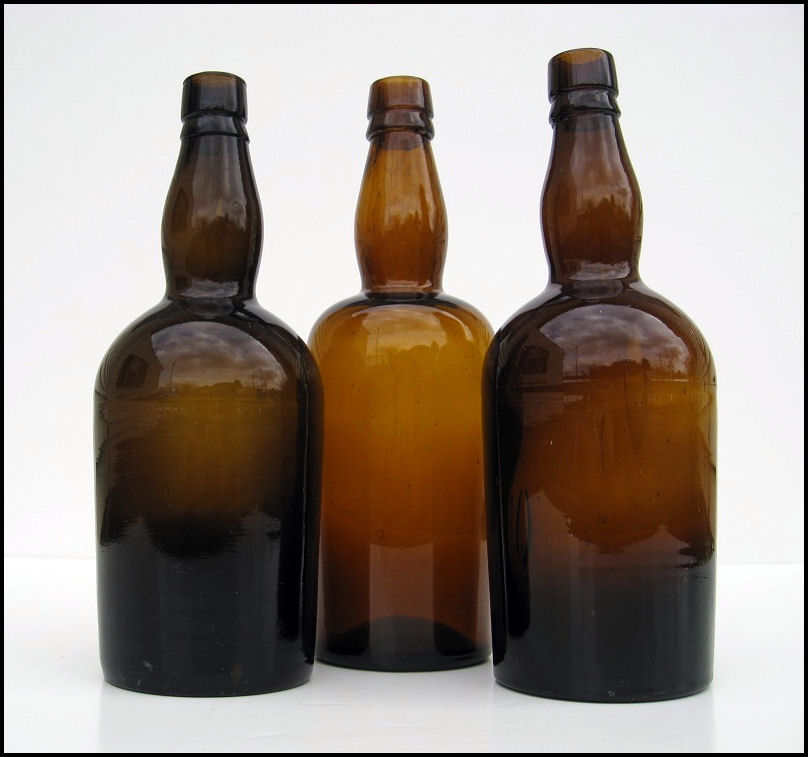 There’s a very hard to find 1870’s figural pig shaped bitters bottle called Suffolk Bitters. It only came in various shades of amber. If you can find the chance to acquire one, the price ranges from $900.00 to $1400.00 depending on color and condition.

In Murano, Italy, these rare bitters figural pigs were reproduced in the 1970’s. They were issued in 5 colors, amber, yellow-amber, green, blue-green teal, and cobalt blue. I found one and it started a fun little collection for me. Glass doesn’t have to be old to be beautiful, and let’s not leave out the cute factor either. I have a color run in these and am only needing the cobalt version. These are actually not easy to find and are becoming quite popular as others see them as beautiful as I do. These range from $11.00 to $25.00 depending on color. 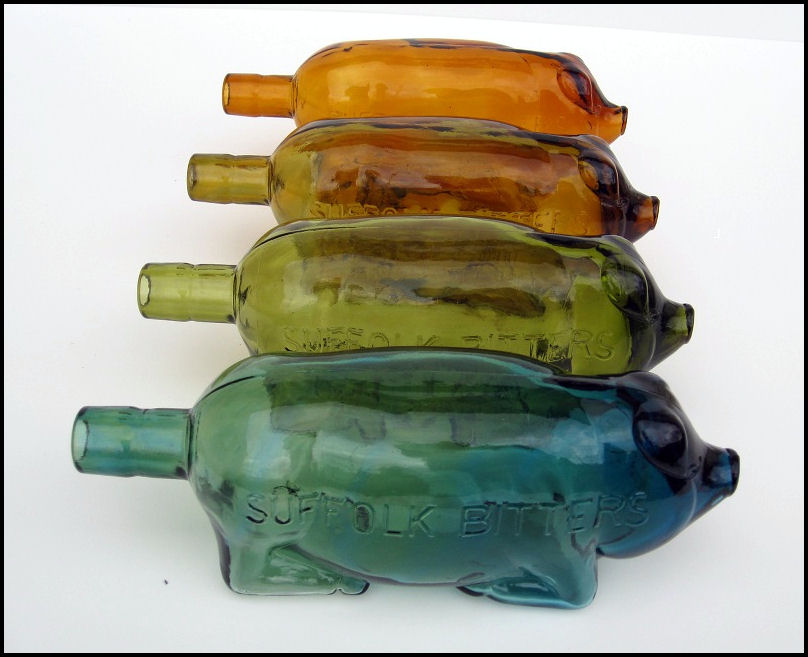 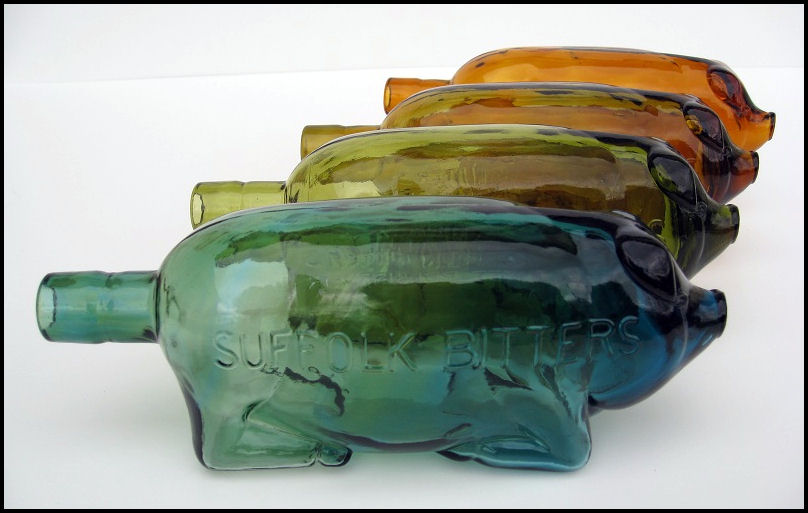 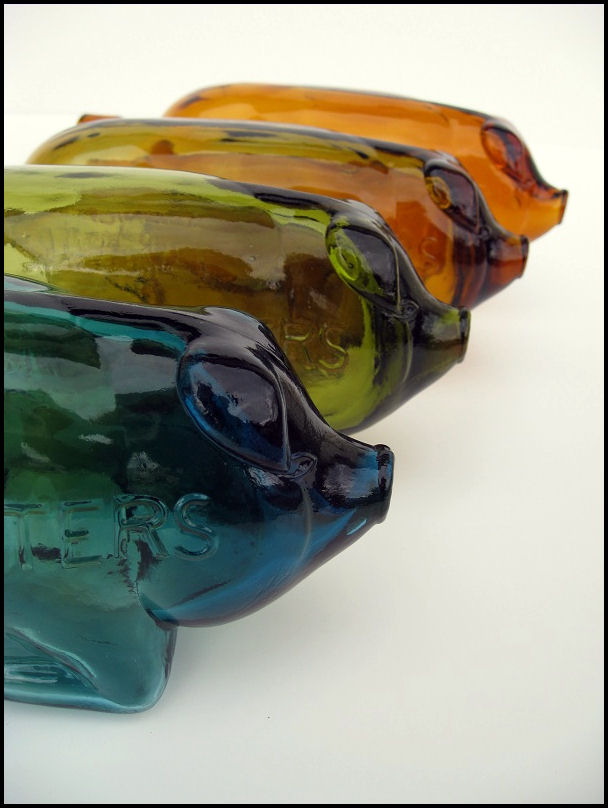 So there you have it. It doesn’t always have to be a rare historic piece of glass; sometimes the most fun things are the low end pretty ones you get for a deal. Don’t think the deals are all picked over and gone. These deals and lucky finds happen more often than you think. And they will always happen, all you have to do is be there.